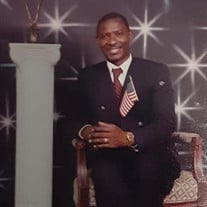 Techelet Cherilus was born in Port-de-Paix, Haiti on March 15, 1955 to Acephie Brazela and Stephen Cherilus in a large family. He was born in a family with 9 siblings (5 brothers and 4 sisters), of which three preceded him in death. In his early adulthood, Techelet moved to Miami, Florida where he joined his big brother, Andre and sisters, Bernadette and Carmen. While living in Haiti, Techelet had a daughter named Loude, who preceded him death at an early age. After his arrival from Haiti, Techelet then welcomed two sons and two daughters. As a father, Techelet was a great provider to his children and made sure that they were always respectful and presentable. Professionally, he worked in the hotel industry, specifically at the Fountain Bleu Hotel and in the restaurant industry. In his personal life, he was very close to his siblings locally and abroad and had great respect for his older brothers and sisters. On any given day, you would find him and Andre hanging out together, telling jokes with each other and talking about life or visiting their sisters. He always imparted the message of keeping the family close and together no matter what. Techelet loved to listen to his favorite song “Telephone Love” and loved to dance and always was doing his signature dance moves at parties or just for fun on video. He had a great relationship with his nieces and nephews and was considered the “cool” uncle because he was always dressed “to the nines”. Over the years, Techelet’s health began to decline and his dear sister, Bernadette stepped in to help as his caregiver with Andre’s support. Although Techelet did not regularly attend church, he accepted Jesus Christ as his Lord and Savior. In the end, his children were by his side until God called him home. His spirit and legacy will forever live in them always and forever. Techelet is survived by his loving children: Techeline Cherilus, Garry Cherilus, Wisler Cherilus, and Jena Cherilus; his grandchildren: Serenity Cherilus, Demaris Cherilus, Ariana Cherilus, Jasmine, Keyarra Cherilus, Kareno Cherilus, Mason Cherilus, Zaria Cherilus, Serena Cherilus, and Royal Cherilus; three sisters: Carmen, Enide, and Bernadette; three brothers: Edvert, Bernadel, and Andrale; and a host of nephews, nieces, cousins, and friends.

Techelet Cherilus was born in Port-de-Paix, Haiti on March 15, 1955 to Acephie Brazela and Stephen Cherilus in a large family. He was born in a family with 9 siblings (5 brothers and 4 sisters), of which three preceded him in death. In his early... View Obituary & Service Information

The family of Techlet Cherilus created this Life Tributes page to make it easy to share your memories.

Techelet Cherilus was born in Port-de-Paix, Haiti on March 15,...

Send flowers to the Cherilus family.