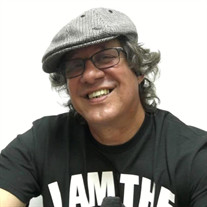 Kefren Bienvenido Arjona, age 62, was born in Havana, Cuba and immigrated to Florida as a teenager. Kefren was a loving husband to his “twin soul” Maria Arjona, a fantastic father to Chris, Kefren Jr., Kassy, and Jessy, and a proud grandfather to Hashley, who he tenderly called his little “Juanita”. Kefren was an entrepreneur, a chef, a business owner, a manager, and at one point, an adjuster, a shoe salesman, and a farmer of chickens. Just as Kefren’s mind was wide-ranging, so was his palate for food, spirits, and music. He enjoyed concerts, dancing, knowledge and life itself. Kefren arrived in Miami at 13 years old, self-teaching the English language until his late teenage years when he relocated to New York City. After finding himself in NYC, he refocused to Miami and acquired his GED. He then put himself through school where he earned his bachelor’s degree in marketing and several years later he returned and graduated with a master’s degree in business. To know Kefren is to have laughed with or to have shared a kind word, whether a close friend or stranger. Being humbly social was a special gift upon which he was bestowed; those around him were drawn to his infectious and enthusiastic personality. Conversing with Kefren was to get lost in stories of Cuba, Miami, strategies, business, food and what seemed as an endless supply of knowledge. He was always excited for the future and the next adventure. He was a hard worker, a resilient figure in the face of adversity and a person who provided exemplary effort. He was one of a select few who could actually rise to meet challenges with a smile. Kefren carried an eclectic soul, never hesitating to throw himself into passionate projects. Recently returning home to Miami from Oklahoma City, Kefren enjoyed having a variety of fruits, flowers, and plants in his backyard. Although Kefren didn’t know how to swim, he loved the water and had taken upon in plans to rebuild a boat for future family outings in the sea. He offered a level of optimism that was honest, heartfelt, and spilled over into all that he did. He saw the world as it was and despite the challenges that existed, he still looked towards beauty and wonder as a conscious choice. Profoundly loved by his family, Kefren was an inspirational figure to look up to. Kefren’s work and wild ambitions will be remembered and his influential and loving nature will be beyond missed.

Kefren Bienvenido Arjona, age 62, was born in Havana, Cuba and immigrated to Florida as a teenager. Kefren was a loving husband to his &#8220;twin soul&#8221; Maria Arjona, a fantastic father to Chris, Kefren Jr., Kassy, and Jessy, and a proud... View Obituary & Service Information

The family of Kefren Arjona created this Life Tributes page to make it easy to share your memories.

Kefren Bienvenido Arjona, age 62, was born in Havana, Cuba and...

Send flowers to the Arjona family.