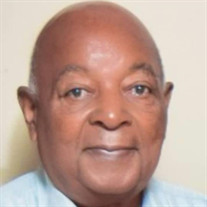 On Monday, October 26, 2020, Jean Emile Romain, loving husband and father of eight children passed away at age 84. Emile was born on February 14, 1936 in Meyer, Croix Des Bouquets, Haiti to Jacob Romain and Angelina Bastien. He was raised in Port-Au-Prince by his dearly departed sister, Marie Romain Michaud. At a very early age, he was responsible for managing his father’s estate. He graduated from Petit College St. Martial (Seminaire) and received his professional training as an accountant and Carpenter from JB Damien. He worked for CAMEP (Central Autonome Metropolitaine D’eau Potable} as a pay master accountant for a number of years. He later became self -employed, farming large quantities of chickens wholesale, supplying hotels and supermarkets in Port-Au-Prince. He migrated to the United States, joining his wife, on April 4, 1968, the day of the late Martin Luther King’s assassination. He spent less than one year in New York, his port of entry, where he shortly worked an entry level position at a bank. He later worked as a cabinet maker. He relocated to Boston where he worked for Peter Bent Brigham Hospital for a little over 20 years. He rose through the ranks and retired as the director of the Carpentry Department. He shortly lived in South Florida and moved back to Haiti in 1986. He established and operated Les Ateliers Creole Romain & Fils, a wood craftsmen shop, specialized in fine custom furniture with its motto: “If you can imagine it, we can build it”. His cherished dream had materialized. He closed the shop in April 2019 and returned back to South Florida for medical care. Emile married Adeline Ambroise Romain. They raised four sons, Burt, Philippe, Rudy, Emile Jr. and two daughters, Regine and Shirley. He also raised two other adopted sons, when he returned to Haiti, Charles and Silius. Emile was known as a much disciplined, logical man, and a straight shooter. He had a passion for perfection in wood craftsmanship, he was a perfectionist, he was a man of religious faith, and evidently he was responsible for the building of Christ Roi, a Catholic Church right next door to his home on land donated by the Romain family. He was known for his love for family, his kind and compassionate spirit. He regularly hosted family get togethers on weekends; that’s when he was the happiest man in the world. Emile was preceded in death by his father Jacob, his mother Angelina, his brother, Paul, his sisters, Marie and Odette. He is survived by his ex-wife, Adeline, his eight children, Regine, Burt, Philippe, Rudy, Emile Jr. Shirley, Charles, Silius, his sisters, Jeanine Bertrand and Edith Gousse, fifteen grandchildren, six great grandchildren, several cousins, nieces and nephews.

On Monday, October 26, 2020, Jean Emile Romain, loving husband and father of eight children passed away at age 84. Emile was born on February 14, 1936 in Meyer, Croix Des Bouquets, Haiti to Jacob Romain and Angelina Bastien. He was raised in... View Obituary & Service Information

To Join our Livestream, please click on the link here: https://tributebroadcast.com/jean-emile-romain

Send flowers to the Romain family.