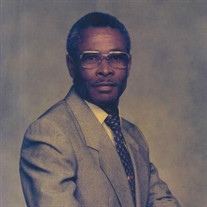 Mr. Berlus was born on January 17, 1930, in Port-au-Prince, Haiti. He came to America in the 1980s. His family came from Aux Cayes. His mother had several kids, one of them lived with him for a while and her name was Decela Deye who passed away not so long ago due to a pulmonary disease. First of all, he was a Christian, a Man of God, a deacon and a choir member. He loved to sing Christian songs. Gesner Berlus was a wonderful man. He was a hardworking man who was a shoe maker and a businessman. He loved to travel. Growing up he used to joke a lot and liked to make people laugh. He was an easy man who loved life.  He was married to a beautiful and talented woman named Vecia Charles, who unfortunately passed away March 3rd, 1998. They had six children together. He had five other children. And 35 grandchildren, and five great-grandchildren. He remarried in December 2005 to Leonne Singer. He deeply loved his children and his dream was to bring all his kids to America. And his biggest dream came true on the day of March 12, 2000, when he brought his children to America. He loved to cook and could cook very well for his children. After Vecia passed, he became a mother and a father for his children.  He fell sick five years ago. It got better, but then it got worse as time went on. And he passed away due to a heart attack on October 30, 2021. He will be missed by everybody, especially his family. His children Wesner Berlus (deceased) Mireille Berlus Muller Berlus Jean-Eddy Berlus Robinson Berlus Giner Berlus Erlande Berlus-Jules Gerda Berlus Marjorie Berlus Merline Berlus-Joseph Dominique Berlus His step daughter Daphne Singer His Grandchildren Valentina Berlus Stephanie Allen Jennifer Merandisse Cephas Tropenasse Christa Berlus Melson Berlus Roberto Berlus Robin Berlus Chrislande Jules Meschac Jules Stevenson Berlus Michenaelle Berlus Michelson Berlus Mitchel Berlus Dorothy Berlus Christina Berlus And others.. His Great-Grandchildren Fabris Berlus Rebecca Gaspard Bella-Hadassah Berlus And others.. The Berlus family is deeply affected by his passing. We love him so much and we will miss him.

Mr. Berlus was born on January 17, 1930, in Port-au-Prince, Haiti. He came to America in the 1980s. His family came from Aux Cayes. His mother had several kids, one of them lived with him for a while and her name was Decela Deye who passed away... View Obituary & Service Information

The family of Gesner Berlus created this Life Tributes page to make it easy to share your memories.

Send flowers to the Berlus family.